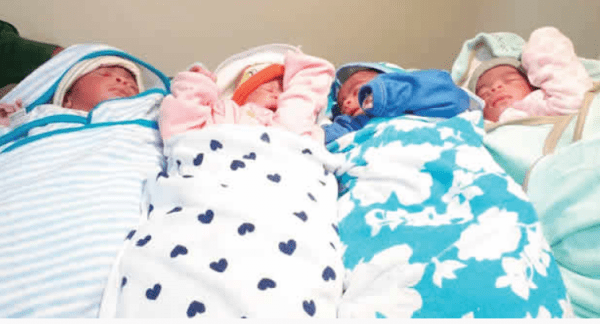 The babies – three girls and one boy – were reportedly delivered on August 6 by a team of 20 medical personnel in a surgery that lasted six hours.

Maureen and her husband, Nonso, had been married for more than five years and had become worried when the 41-year-old woman did not conceive.

The Punch reported that the couple were said to have gone to different prayer mountains and had also sought medical help.

The husband, explained that when his wife became pregnant, they hoped for only one child, but were surprised when the scan result showed triplets.

Kanye West covers self in silver paint for opera

“Try again. It not too late,” – Nollywood actress, Shan George, says, as she’s engaged to be married for the 4th time at age 50

You should not stress your wife, make money before you marry – Comedian Ushbebe advises men