The first day of Big Brother Naija Lockdown has already produced some scintillating drama – enough for fans to get their Twitter thumbs flicking away at their phones.

They started the morning tentatively, sizing each other up, there have been some heartwarming moments, and Laycon is already showing that he’s the brains of the House – all this within the first 24 hours.

Ebuka has already seen the first signs of the street rooting for Laycon. 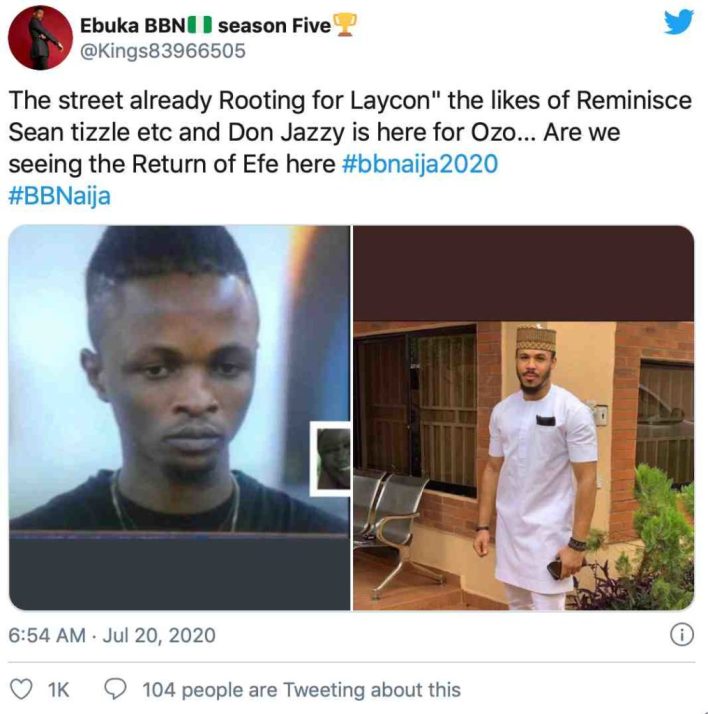 Some of the Housemates are already picking their allies, or is it love? Erica tried to latch onto Ozo but there is evidence he is trying his luck with Nengi. We must admit, though, Ozo and Nengi look delicious together. If they do hook up, can they sail?

From Ozo and Erica to Lilo and Eric, the Ships look ready to sail pretty early. Although Lilo was quite vocal about calling Eric her best friend, their slightly affectionate position told another story. Probably in a bid to know his true intentions or just making conversation, Lilo asked Eric about his plans for the girls in the House. His answer might have not been satisfactory, but she found comfort lying in his arms and that was all that mattered there and then.

The Housemates gave it their all on the first night in the House and they seem really hyped to be in the House. We can’t wait to see how much more they get to reveal about themselves and what dramatic twist and turns we will get during their stay.

Lilo and Eric have been wrapped in each other’s arms already.

Guys, i think lilo found love on the first night. I sincerely hope it doesn’t end in tears for my girl 😭.#BBNaija pic.twitter.com/KNvQwpGeYq

We got a glimpse into who might be the bosses and the followers of the Big Brother Naija Lockdown workouts. At first, Housemates sat on the sidelines, tentatively deciding what to do while watching Neo and Ka3na bust out their dance moves in front of the mirror. It’s safe to say, they can burn the floor.

But after the Housemates warmed up, Praise took over the group session, coaching the ladies and giving sage advice. His efforts didn’t escape the glares of the other men in the group.

Meanwhile, Dorathy got BBNaija fans wagging their tongues for her workout.

Post-workout, Erica and Neo got to know each other a little better. Erica shared her aspirations as a Housemates saying she just wants to get to the end and get the money. Neo then revealed he’s a Cancerian, to which Erica replied: “Usually Cancerians are quiet and emotional. But you’re talkative.”

“He who is faithful with little, will be trusted with much more “ – Mike Edwards appreciates his wife and newborn baby (Photos)