The Imo State police command has apprehended a couple with names, Goodluck Ogbuji, 28 and Benita Ogbuji, 26 for allegedly inflicting severe injuries on their eight old child who bought N100 worth of Akara (bean cake), instead of N50 in Umudagu Mbieri, Imo State. 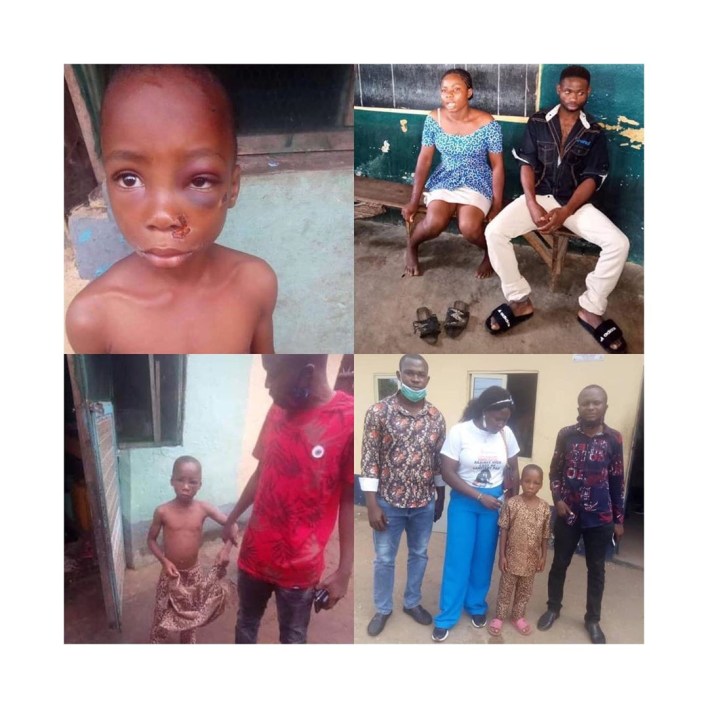 According to the police command, they effected the arrest after they were led by two journalists, Chidiebube Okeoma and Harriet Ijeomo to the couple’s residence at Umudagu Mbieri in the Mbaitoli Local Government Area of the state.

The arrest of the couple was sequel to a social media post which showed pictures of the severe injuries inflicted on the boy identified as Wisdom.

The Journalists who took photos of the injured boy upon arrival at the residence, stated that Wisdom has been out of school since 2019 and has be suffering physical abuse from his parents.

“We got information that a couple dehumanised and almost killed their houseboy because he bought bean cake of N100 instead of N50.We made inquiries through social media and we got their house address. We mobilised policemen to the place in the early hours of Thursday and got the wicked couplea rrested and rescued the child”

“They have been detained at the Orji Police Division, while the boy is being taken care of by the policemen. The level of injuries inflicted on the boy is wicked. We are seeking justice for the child. We want the couple to be prosecuted. The boy has been out of school since 2019.

“A Side chick Is A Glorified Prostitute” – Actress, Eucharia Anunobi

Mother abandons Newborn baby in a dustbin in Calabar (PHOTOS)

What do you call this set of people