Donald Trump has become the third US president in history to be impeached by the House of Representatives, setting up a trial in the Senate that will decide whether he remains in office.

The House voted on two charges – that the president abused his power and that he had obstructed Congress.

Nearly all Democrats voted for the charges and every Republican against.

President Trump’s Republicans control the Senate so it is highly unlikely he will be removed from power.

As voting took place in the House, Mr Trump was addressing a campaign rally in Battle Creek, Michigan.

He told a cheering crowd: “While we’re creating jobs and fighting for Michigan, the radical left in Congress is consumed with envy and hatred and rage, you see what’s going on.”

The White House released a statement saying that the president was “confident that he will be fully exonerated” in a Senate trial.

What happened in the votes?

After 10 hours of partisan debate on the merits of the two impeachment charges against President Trump, the House called for votes at about 20:30 local time (01:30 GMT).

The first charge is abuse of power, stemming from Mr Trump’s alleged attempt to pressure Ukraine to announce investigations into his Democratic political rival, Joe Biden.

It passed by 230 votes to 197, almost completely on party lines. Only two Democrats opposed – New Jersey’s Jeff Van Drew, who is set to leave the party, and Minnesota’s Collin Peterson.

The second charge is obstruction of Congress, because the president allegedly refused to co-operate with the impeachment inquiry, withholding documentary evidence and barring his key aides from giving evidence.

It passed by 229-198. Democrat Jared Golden of Maine voted for the first charge but opposed this.

No Republicans supported impeachment, although ex-party member Justin Amash, from Michigan, did.

Being impeached places Donald Trump alongside only two other presidents in the nation’s history – Andrew Johnson and Bill Clinton.

A day of hyper-partisanship

And so it is done. Donald Trump now becomes the third member of the exclusive club that no-one wants to be a member of.

But the framers of the constitution with its impeachment provision could never have imagined the hyper-partisanship – on both sides – that has been witnessed during today’s sterile House proceedings. Each side with its own narrative, neither side listening to the other. And one can say with some certainty – I would bet all my yet-to-be-gifted Christmas presents – that it will be much the same once this becomes a trial in the Senate in the New Year.

Donald Trump will be acquitted. He won’t be forced from office. So what changes? Well, Donald Trump will have a place in the history books – and for a man with such a huge sense of self that will hurt. Acutely. But 2020? Far from this being a killer blow against President Trump, it might turbo charge his bid for a second term. The House Speaker Nancy Pelosi was always wary about going down the impeachment route. We’ll discover next November whether that concern was well founded.

A trial is set to take place in the Senate in the New Year.

The Republican Party has a majority there, making it almost impossible that the president will be removed from office when senators cast their votes.

READ ALSO  How 9 Nigerian Girls Being Trafficked To Lebanon, Dubai and India Were Rescued At Lagos Airport

Republican Majority Leader Mitch McConnell last week said that Republican senators would act in “total co-ordination” with the president’s team during the trial, outraging Democrats who pointed out that Senators are obliged to act as impartial jurors.

After Wednesday’s votes, Democratic House Speaker Nancy Pelosi indicated the House might delay sending the articles of impeachment to the Senate – and therefore the start of the trial – to try to bargain on the terms.

“We will make our decision as to when we are going to send it when we see what they are doing on the Senate side,” she said. “So far, we have not seen anything that looks fair to us.”

It is up to Mr McConnell to decide the rules for the trial and which witnesses will testify. He is due to address the Senate on Thursday.

What did House members say during the debate?

Ms Pelosi opened the debate, saying: “For centuries Americans have fought and died to defend democracy for the people, but very sadly now our founder’s vision of a republic is under threat from actions from the White House.

“If we do not act now, we would be derelict in our duty. It is tragic that the president’s reckless actions make impeachment necessary. He gave us no choice.”

Democratic representative Joe Kennedy, a grand-nephew of President John F Kennedy, used his speech to address his children directly, explaining his decision to vote for impeachment.

“Dear Ellie and James: This is a moment that you’ll read about in your history books,” the Massachusetts congressman said, going on to accuse the president of “using his power as a weapon against his own people”. 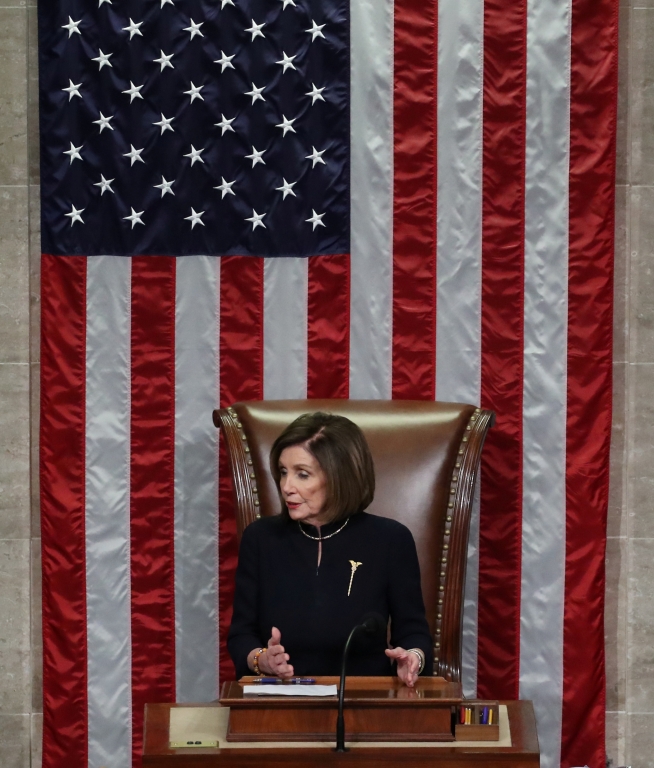 How the House voted

The two charges of impeachment

Doug Collins, the top Republican on the House Judiciary Committee, accused Democrats of conducting an unfair and illegitimate inquiry.


“This is an impeachment based on presumption. This is a poll-tested impeachment about what actually sells to the American people,” Mr Collins said.

Republican Barry Loudermilk compared the impeachment process to the fate of Jesus Christ. “During that sham trial, Pontius Pilate afforded more rights to Jesus than Democrats have afforded this president in this process,” he said.

Democrats were reportedly instructed by Ms Pelosi to treat the process solemnly. She told reporters outside the chamber she was “sad” about the proceedings, and a number of Democrats reflected on their disappointment at being involved in the impeachment.

Ms Gabbard, who effectively abstained, said she believed Mr Trump was guilty of wrongdoing but that she could not support a “partisan process, fuelled by tribal animosities”.

Across the country in the 24 hours leading up to the vote, pro-impeachment protesters took to the streets. Hundreds of people gathered in Times Square in New York on Tuesday night, chanting: “Tell me who’s above the law? Nobody is above the law!”

How has Mr Trump responded?

During the House debates, Mr Trump tweeted several times, calling the Democratic arguments “ATROCIOUS LIES BY THE RADICAL LEFT” and an “ASSAULT ON THE REPUBLICAN PARTY!!!!”.

At his Michigan rally, he told supporters: “The Democrats are declaring their deep hatred and disdain for the American voter.

The president had also made an extraordinary intervention on the eve of Wednesday’s vote, penning an irate six-page letter to Ms Pelosi accusing her of declaring “open war on American democracy”.

Abela to take over as Malta’s new prime minister

EU’s Michel travels to Turkey, Egypt for talks on Libya