Nigerian Male Barbie, Idris Okuneye aka Bobrisky has opened up on why he dressed like a man to attend his father’s birthday party.

One of his fans, identified as Prince Sidney had taken to the comment section of his post to ask him why he looked so modest on his father’s birthday.

Bobrisky in his reply, said there’s absolutely nothing wrong with what he wore to his father’s birthday, and it wasn’t necessary to ‘paint his face’ while visiting his father.

He stated that he respects his family so much, adding that his cross dressing life isn’t a secret to his parents, because they see his pictures on IG.

There is absolutely nothing wrong with what i am wearing.

I wore a face cap and a black jalabia. I am not the celebrant i don’t have to paint my face to my dad house.

I respect my family. Oh you think my parent don’t see my IG. 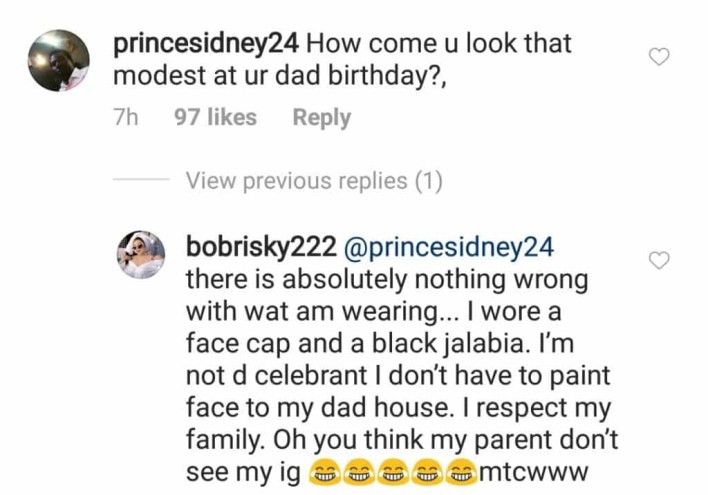 Actor, Browny Igboegwu narrates how he was mocked and advised to pick another wife as he welcomes a child after 10 years of marriage

Checkout the adorable photos of sextuplets who graduated same day

#BBNaija: Lucy becomes next housemate to be evicted from the house