A video of a Nigerian pastor and his church members exchanging blows with their landlord, over quit notice has been making rounds on social media. 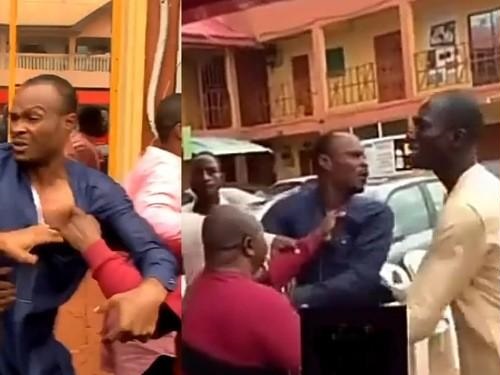 According to reports, the fight began after the landlord stormed the church and gave them Quit Notice to leave his space.

The incident happened this morning at Grace and truth arena Church, located in Asaba, Delta State.

The video captured the moment, the church got into a physical fight with the landlord.

In related news, a Nigerian Pastor set social media abuzz after a video of him raising a ‘dead woman’ who was brought to his church, back to life went vial.

A woman was spotted in a casket with whitish substance on her face as the Pastor prayed. Some members of the church were also spotted singing in the background before the woman who was being prayed for, leaped out of the casket.

This has stirred up a controversy on the internet as many tagged the act as “fake miracle”.

#BBNaija: Kiddwaya, Tolanibaj and Erica issued strikes over flouting HoH lounge rules; Erica will be disqualified after one more strike