North Korea has confirmed that it conducted another test at a satellite launch site on Friday, December 13th to bolster its strategic nuclear deterrence.

According to North Korean state media outlet KCNA, the test was conducted at the Sohae satellite launch site, citing a spokesman for North Korea’s Academy of Defence Science, without specifying what sort of testing occurred.

It was the second such test at the facility in a week. KCNA on Sunday said that North Korea had carried out a “very important” test on December 7th at the Sohae satellite launch site, a rocket-testing facility that U.S. officials once said North Korea had promised to close.

The reported tests come ahead of a year-end deadline North Korea has put forth for the United States to drop its insistence on unilateral denuclearisation.

Pyongyang has warned it could take a “new path” amid the stalled talks with the United States. The top U.S envoy for North Korea is set to arrive in Seoul on Sunday for meetings with South Korean officials. 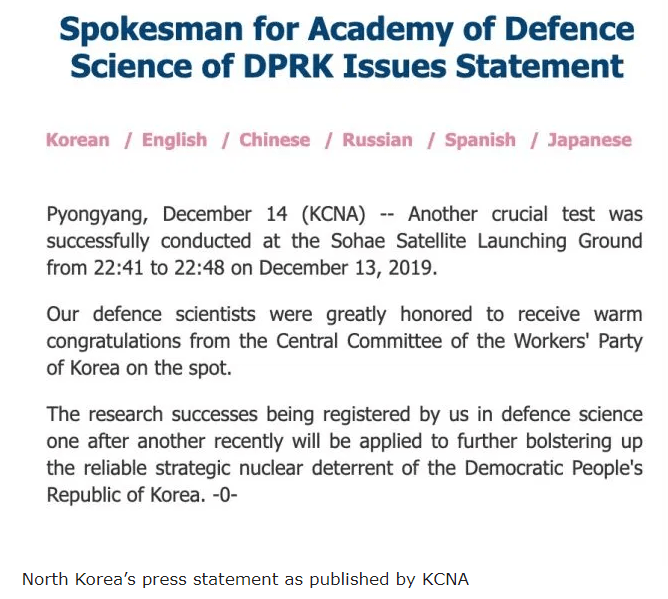 Tension has been rising in recent weeks as Pyongyang has conducted weapons tests and waged a war of words with U.S. President Donald Trump, stoking fears that tensions between the two countries could return.  Stephen Biegun, U.S. special envoy for North Korea, will arrive in South Korea on Sunday, Seoul and Washington said on Friday.

They will create the virus, pretend and sell the antidotes | Muammar Gaddafi

President Duterte to military: Prepare to evacuate Filipinos in Iran